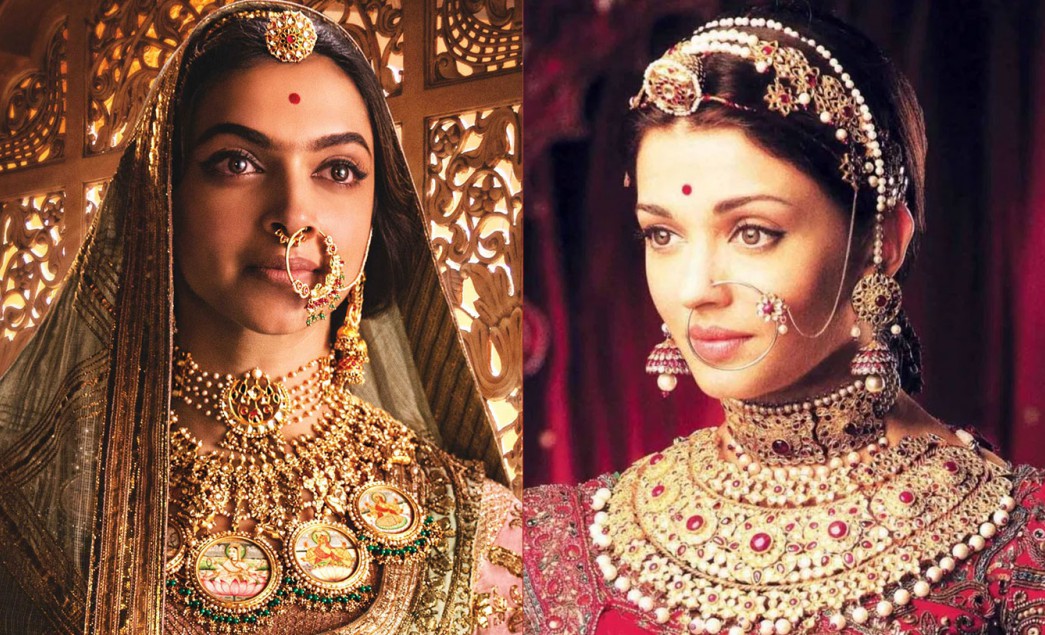 Rajasthani Aadh, Chick Set Necklace, Chokers, Kamarbandh, Kanthi, Matha Patti, Polki, Puncha, Rajasthani Bajuband, Rajasthani Bangles, Rajasthani Kada, Rajasthani Moti Set, Rajasthani Nath, Rakadi-Borla, Rakhadi, Timaniya etc. are some of the many varieties from the treasures of royal and traditional Rajasthani Jewellery from Rajasthan. These Jewellery designs are relevant and popular till today with a touch of modern comfort and detailing added to them.
One of the world's largest film industry ie. Bollywood (popular name) has been always fascinated by Rajasthan, its stories and its royalty.
It is said that, in Ashutosh Gowariker's historical romance "Jodhaa Akbar" two hundred craftsmen worked for 600 days, moulded 400 kg of gold and precious and semi-precious stones to recreate jewelleries of Mughal era. Tanishq, the leading jewellery brand, unveiled the jewellery worn by Aishwarya Rai, who plays the Rajput princess Jodhabai and Hrithik Roshan, who features as Mughal emperor Jalaluddin Akbar, in the movie.
A blend of Mughal and Rajasthani designs, the handcrafted jewels on display are breathtakingly beautiful and give an insight to India's glorious past.
"Akbar's favourite gem was the emerald. In 'Akbarnama' there are actually blue prints of emerald mines, which Akbar had started and wherever you see him, he wears emeralds, which is the symbol of power."
The designs are mostly "kundan and meenakari"- inlay work common to Rajasthan. "The interesting thing about most 'kundan' and 'meenakari' is as many as five craftsman worked on one single piece. One made the mould, another set the stone, one inlaid the pearls and others made the colourful 'meenakari' work. So, each jewel takes a long time to craft. It's not factory-made. The jewellery was handcrafted.
In the magnum opus film "Padmawat", Directed by Sanjay Leela Bhansali Set in medieval Rajasthan, Queen Padmavati is married to a noble king and they live in a prosperous fortress with their subjects until an ambitious Sultan hears of Padmavati's beauty and forms an obsessive love for the Queen of Mewar.
Deepika Padukone's look for the "Ghoomar" song features intricate jewellery weighing up to 3 kg designed by some of the finest Jewellery Designers of India featuring a triple Borla, Mathapatti and Bajuband which are traditional ornaments worn by the Rajasthani women.
Deepika, who plays the role of Rani Padmini, looks like a dream adorned in intricate Rajasthani costumes and jewellery. A recent behind-the-scenes video reveals that it took 200 craftsmen who spent 600 days molding 400 kgs of gold to bring the beauty of Rajputana era back to life.
While Padmavati (Padukone) will be seen wearing bold naths, jhumkis and kundan necklaces in the movie, Alauddin Khilji (Singh) will be channeling his warrior character through heavy gold pieces in the film.
The Jewelery shown in the movie is a true marriage between intricate craftsmanship and Rajasthani heritage. The range features everything from kundan polki necklaces to haath phools, and an assortment of naths, arsi finger rings, bangles, chokers, necklaces, mathapattis and ear cuffs created with gold, pearls and precious stones such as opals, topaz and emeralds, to bring alive the grandeur of that era. Take a look through our slideshow for a peek at the collection.
We just hope and wish that Bollywood continues to showcase the Traditional Indian Jewellery designs in its full glory in more and more films.

You must login to add a comment. If you do not have an account, you may register for one. Registration is free!